Hey Joe, hey Dan! What's up? What's been happening lately? What are you doing/listening to right now?
Joe: Yo Nastya, we're heading to Germany on Friday to play Break Down The Walls fest, other than that just enjoying the hot weather and chilling at the beach whilst listening to music about girls.
Dan: Hey Nastya, lately I’ve been surfing and generally hanging out in the sun, I love summer. Lately I’ve been listening to the new Rival Schools record a lot, which is incredible. And after reading that Double Cross interview with Jules from Side By Side I’ve been listening to SBS a lot more than usual. Along with The Smiths (every day).

Let's start with introduction. What is Wardogs? Who are Wardogs? Tell me some funny stories about other member. Btw, any Iron Boots reference in the name of the band?
Joe: Wardogs is a collective of party enthusiasts and we just want to play everywhere whilst hanging out with our friends, the band consists of Ricky Stix, Pablo, Naughty Dan, Riff master Rofe and myself, above average Joe. I can't really remember if it was initially a Boots reference but it may aswell be as Iron Boots ruled and are one of our favourite bands.
Dan: Wardogs was originally an excuse for us to hang out but we made a band out of it because we all liked Pablo so much, he’s my best friend. We were stuck for a name and we all thought Wardogs was the perfect name, but yeah we did get it from the Boots song. They were awesome. The only funny things that I can think of right now is when Joe gets high and starts talking like he’s American or black. He named himself Phat Nigga the other night. Smokey Joe.

How did you come with the idea to start a band?
Joe: Everyone but myself was in a band at the time and weren't really playing what they wanted to play so we just came up with the idea of starting a band for fun early last year, we just wanted to do a straight up hardcore band and have fun.
Dan: Me and Joe came up with the idea for this band a long time before we got the demo together. It was originally going to be a side project and do nothing more than a demo. I was already in a band but it wasn’t really to my taste in hardcore, so I wanted to start something with a bit more of an old school influence and ethic.

What was the way from the 1st practice to the 1st show ever? (who else played?)
Joe: When the band first started we had a different second guitarist but he's a cock so we told him to fuck off, we wrote the demo as a four piece in a couple of weeks and recorded it not long after, our first show was the BWP record release, More Than Life, Basement and Almost Home played also, that was a cool show. I think we're the first band ever to have a car bonnet as a flag on stage, swag.
Dan: Our first practice was probably about a year before our first show, we were really lazy about it, but I’m glad we waited because if we had rushed out a demo, it probably would have been shit. Our first show was the BWP record release show. Tom Ironclad punched Joe in the nose, it was awesome.

Let's talk about records. Which bands influence you and your music?
Joe: I wouldn't know where to start with our influences, it ranges from early NYHC all the way to Lockin Out stuff, we've been likened to Warzone a fucking lot which I don't really hear but that's cool so yeah.
Dan: It’s hard to say what bands influence the Wardogs songs. There’s too many to name. When I listen to the record I can hear exactly what each part is influenced by. On the 7” there’s a part that reminds me of The Abused and another part that I subconsciously stole from The Mob.

When is the new record coming out officially? What do you think about it and about CTW records? :)
Joe: The record should be out next week and hopefully in time for our record release next weekend at the final CCHC show, Carry The Weight records are easily one of the best hardcore labels going right now, Pat and Tomas are continuously putting out awesome releases and they work hard to please the bands, they're really good looking guys too so if you're a girl who's riding the dick of boys in to hardcore, get at them. They've been nothing but great towards us and we can't imagine being on any other label unless it was Metal Blade (sorry).
Dan: The record will hopefully be with us at the start of May. CTW is the best label in Europe by a mile and like Joe said, those guys are hot.

What are your fav songs from both EPs and why?
Joe: My favourite song on the demo is probably Self Righteous, it's about some bullshit that happened between me and a supposed friend a while back so I wrote a song about him, like Tupac would. As for the 7", it's probably Sick & Tired which is basically about my life over the last year, the 7" in general is all about shit that went on in my life over the last 6-8 months so buy it and listen to me moan about stuff you'll relate to if you're a fourteen year old girl.
Dan: I personally much prefer the new songs on the 7” to the demo tracks. The 7” is a bit more aggressive I think, which is exactly what I wanted to make it after the demo. My favourite song of ours is Something Has Got To Give.

Joe, who writes the lyrics? Do you have your favorite songwriter? I mean, whose lyrics mean to you so much and all that shit
Joe: I write all the lyrics but if the other guys think they're shit then we'll sort them out together, Dans good at that and doesn't know it yet but he's writing the lyrics for the LP. My favourite songwriter within hardcore? Probably Tommy from Straight Ahead or Richie of Underdog, outside of hardcore I'd have to say BigL or Marvin Gaye, that is serious love music.
Dan: My favourite songwriter is Morrissey. Just wanted to add that. So if I’m writing lyrics for the LP then you can expect some sweeping metaphors about love and missing my friends.

Btw, i am stoked on that upcoming tour. I mean, 2 shows in Ukraine? For real? Would be great. Which countries are you going to visit?
Joe: Yeah it's going to be the tits, it's going to be a good couple of weeks with Abolition from London. I can't really remember where we're going, I think it's like Belgium, Germany, Hungary, Slovakia, Ukraine, Poland etc so it'll be really cool!
Dan: Every couple of days Joe calls me telling me about a tour that we are doing but so far none of them have ever happened haha, but I really hope the tour with Abolition actually happens. On a few occasions we have all got in to a big discussion about Chernobyl and the Red Forest, so if we get to come to Ukraine, I am moshing (metaphorically). Actually, that's what i'm going to write the LP lyrics about. It's going to be a concept record about how to survive as a crew in the Red Forest. I have been told a bunch of crazy countries that we’re going to, but to be honest we’re pretty unorganized so we’ll be lucky if we make it to the ferry.

What do you think of hardcore scene inn the US/UK and Swansea particularly? Any good local bands (and not just local) to recommend?
Joe: The US is always going to have a really strong scene overall, there's so many bands coming out of there that there's never really a dry spell. The UK is awesome right now, there's a lot of bands who are really going places and putting our records worth listening to, it's the tits right now. Wales has always been different to the rest of the UK, for a long time we were easily the best scene, we had the best bands, the best shows and it was a group of friends instead of just people from all over going to a show, I think that's quite rare to find but sadly everything comes to an end and with the final CCHC show next weekend, I think it's going to be very quiet around here.
Dan: I think people over here forget how big the US is. Each state is about the same size as the whole of Britain. So it’s easy to say “the US has a great scene”, but that’s just what we see from over here on the internet and such. Don’t get me wrong, some of the bands in the US right now are amazing, but come on…there’s a lot of shit ones too. Same with any country. My favourite current hardcore band is probably Mind Eraser.

Do you know any hardcore/punk bands from my area? (Russia/Ukraine)
Joe: Nah I don't which sucks really as I'm sure there are some quality bands there, eastern Europe doesn't get much attention when it comes to hardcore so it must be really hard for bands to get noticed, recommend me some stuff to listen to!
Dan: I don’t think so no! Although one time a Russian ice hockey team came to Cardiff and I saw that game, it was awesome. They were called Russian Red Army or something.

What do you do besides WD? Got any hobbies? Maybe, silly ones, haha
Joe: Just hang out and stuff, everyone is either working or in education so I guess that counts. I like to listen to Taking Back Sunday in my pants and chain smoke a lot!
Dan: I surf and skate as much as I can with our drummer Ricky Twix.

What is the most unreal thing you'd love to do, but you know for sure it's never going to happen?
Joe: I'd love to win the lottery and adopt a puppy every day, I'd sleep on a bed of puppies and they'd cuddle me for all eternity.
Dan: I’ll agree with Joe. I’d love to win the lottery and do the most insane shit. People say money cant buy happiness, but I’m pretty happy with my life anyway, so if I had a shit load of money I’d be set. I’d move me and my girlfriend to New York, buy a pug and live happily ever after. I would name the pug Sylvester.

If you had DeLorian in which year/era would you travel?
Joe: I'd go back to like 1920 or something and take Hitler on a night out so he isn't so uptight and a dick, I'd pay for him to do shots and who knows, maybe he'd become a hairdresser instead?
Dan: I’d probably just go back to the mid 80’s in New York. I’d get to see all the best punk shows and stuff. Then I’d steal all the rhymes that Nas and Big L hadn’t written yet and be a huge rapper, DMoney or some shit.

And final Q. Just me being curious :) BEST line up for a show? 5 bads (active or dead, doesn't matter). Imagine like it would be the last show in your life. haha
Joe: Metallica circa 86, Tegan And Sara, Straight Ahead circa 88, Prince and Queen.
Dan: Nirvana, The Smiths, Jawbreaker, Brotherhood (they are my favorite hc band) and Joy Division.

Thanks a lot guys! Hugs <3 Any last words?
Dan: The Wardogs "A Crew In The Red Forest" Musical, coming 2012, you are not ready. 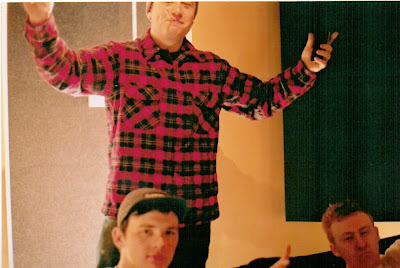